Shaped by a solid work ethic, the story of the Fenestraz family proves that mountains can literally be moved … The Raymonde and André Fenestraz success story has been written with French flare, and today their son Raoul continues the family tradition.

OUR STORY BEGINS WITH RAYMONDE 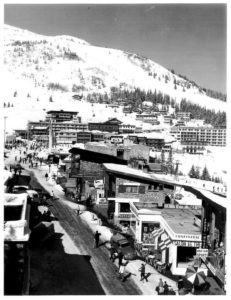 A countryside girl who pushed for the development of winter sports in the Tarentaise Valley.

Her intuition led her to leave the Savoy region for Great Britain to learn English while working as an au pair and then as a maid.

She wound up running the family hotel before returning home.

There, she developed her negotiating skills in a small real estate agency in Courchevel, which she went on to buy in 1966.

Then, she met her husband André, a traveling coffee merchant who went on to work in building construction.

Allying their talents, the Fenestraz’s were pioneers in the construction of luxury chalets and homes, among which were the Hameau de Bellecôte Chalets, the Chalet de Pierres and the Jardin Alpin Residence. These creations give the Courchevel 1850 ski resort the allure and the famous reputation that they still enjoy to this day.

The young couple built the AlpenRuitor hotel and residence. The white facade became the symbol of the village of Méribel Mottaret, which is another favorite among skiers. The development of the family business continued with the Hôtel de la Loze, also nicely placed opposite of the Croisette and the slopes of Courchevel 1850. Restored in the Savoyard style, the establishment also features two sumptuous Appartements d’Exception.

During the 1992 Albertville Winter Olympic Games, Raymonde and André didn’t let the chance to realize their dream slip by. At Courchevel, they transformed the outdated Airelles hotel into a magnificent luxury hotel, often referred to as the “Palais de Sissi”. Considered to be one of the finest hotels in the world, the address carries on the soul of the owners, who held on to it just until 2007.

During this time, Raymonde and André’s only son Raoul also decided to live out his dream. With his wife, Stéphanie and their three children, they moved to Argentina.

30 years after the first construction in the Savoy region, it was Stéphanie and Raoul’s turn to become pioneers! Living near Cordoba, the built a sumptuous residence, whose architecture was inspired by the farms of the early 20th century. Open in 2005 and member of the Relais & Châteaux, the Estancia El Colibri offers guests the opportunity to discover Argentina’s rural way of life, horse ranching and polo.

Just a few kilometers away, Don André – as a tribute to Raoul’s father, who passed away in 2011 – is a 700 hectares property specializing in ranching Aberdeen Angus cattle for producing some of the best beef in the world. They are now developing a “grass feed” type of beef with a holistic concept that takes care of the animal welfare as well as the future of the environment.

The Argentinean dream of the Fenestraz family can also be found near Salta, in the northern region of Argentina. Acquired in 2007 by Oscar winner Robert Duvall, House of Jasmines is also part of the Relais & Châteaux association and it has been elected by the international press as one of the most romantic estancias in the World.

The beautiful Argentina is not the only South American country where the Fenestraz family has landed.

In fact, after experiencing the hippie-chic atmosphere of the fisherman’s village of Trancoso, in the Salvador de Bahia province in Brazil, in 2012 Raoul and Stéphanie decided to acquire and renovate the magnificent villa “Casa Angatú”.

2016 THE LAUNCH OF THE MAISON FENESTRAZ BRAND

50 years after the purchase of the first real estate agency by Raymonde Fenestraz, the group of businesses was regrouped under the banner Maisons Fenestraz.

Whether in the Alps or in South America, these Maisons with authentic styles share the same refinement and discreet luxury. The family motto says, “the best thing that a man can do for another is to share his dream”. Wherever in the world to experience the hospitality of the Maisons Fenestraz is to share this dream.

The brand “Appartements d’Exception” was dedicated to apartments located in Courchevel 1850. In 2018 they have developed the offer with a new selection of deluxe apartments for seasonal rental in Annecy.

One is located in the former “Hôtel de Sales” in the heart of the old city, this 3 ensuite-bedrooms’ apartment is Madame Fenestraz’s “masterpiece”. This magnificent museum-style apartment has been decorated by the artists who did the famous Palace of Courchevel 1850, Les Airelles.

The other is completely different to what we are used to by the Fenestraz Family : a very modern and contemporary apartment with stunning views over the lake. From now on, you can discover those unique properties located in “the little Venice of the Alps”.

In 2019, after 3 years of intense renovations, the Hotel de La Loze reopens its doors with new rooms, new entrance, new living room, new corridors… a new hotel in an even more elegant and refined alpine style or should we say “Fenestraz Alpine Style”.

The renovation and decoration works were brought together by Stéphanie Fenestraz and the architect Bernard Burlot of the agency Carré Concept.

After consolidating the offer of private houses and villas in France, Argentina and Brazil, the pioneering spirit of Raoul and Stéphanie Fenestraz didn’t fade. On the contrary, they followed their instincts and landed in the beautiful region of Apulia, in southern Italy, where they started a new life and family project.

In 2020, Raoul and Stéphanie traveled the length and breadth of southern Italy, looking for a beautiful and vivid place with warm and welcoming people and with an interesting artistic and cultural ferment. This is how they ended up in the Salento region, a land with everything they were looking for: a friendly and vibrant environment, amazing climate and gastronomy, ground to be cultivated with fruit trees, olive groves and vineyards and – cherry on top – incredible Mediterranean coast lines with both sand beaches that make you think of the Caribbean as well as beautiful cliffs and caverns.

Raoul and Stéphanie visited for the first time Torre Ruggeri during the olive harvest of 2019 and they simply fell in love with it. They understood they were visiting what could become their new Italian Maison. Surrounded by 18 hectares of olive trees and agricultural land in a Mediterranean environment, the property is classified as a historical monument.

As the Fenestraz family moto is “the best thing one man can do for another is to share his dream” they decided to renovate Masseria del Gigante – an independent Masseria – to give their guests the opportunity to live and experience their Italian project and dream. With its strong and positive energy, Masseria del Gigante shines under the unique light of Salento and it’s ready to welcome families and groups of friends seeking elegant rural simplicity and a peaceful atmosphere, with a French flair.

Since they moved to Italy, Raoul and Stéphanie have been renovating their family house in El Colibri’ lands to welcome new adventurous guests. “La Maison” is now the first Relais & Châteaux Villa in Argentina and is available for short breaks or longer holiday trips.